A Day in Belfast on a Budget

The Northern Irish capital has recently undergone a massive resurgence in recent years as a tourist destination. Post-troubles, the city has had a lot to celebrate including the centenary of the sinking of RMS Titanic, high profile pop concerts and an infectious atmosphere in the city centre. Belfast is an amazing city still healing its divisions yet getting on with life and becoming one of the most popular city break destinations in Europe. The city has infectious atmosphere with a fabulous sense of humour, an ever-growing range of places to eat, drink and be entertained, and a small town feel which makes getting around easy. Everyone is watching the purse strings these days (and I’m no exception) but that doesn’t mean you can’t have fun. So here’s how I had a great day trip to Belfast on a budget.

We are fortunate in that there are flights available to Belfast from as little as £19.99 from UK airports or rail and sail tickets are available from major cities that link up with the Stena Line ferry which docks right in the middle of Belfast. Or try these Flybe voucher codes for a cheeky saving.

The best way to see Belfast is on foot – it’s really easy to navigate your way around the city centre and there is always the option of jumping on one of the ‘hop on, hop off’ open top buses. They are fairly reasonably priced at £12.50 for a 2 day ticket and they’ll take you out to see Stormont and around the major sights. The tour guides are very informative and keep you entertained as you learn about the history and culture of the city. If you want to venture further out around NI the bus and train services are very good and reach out across the country.

As with any city, there are cheap spots and expensive areas for finding a good pub or place to eat. I’d say stay away from the tourist trap streets and try and find places where the locals go.

For a great day out for all ages, you need to visit the Giant’s Causeway. No one knows how the stones became shaped the way they are, however there is much speculation and myths surrounding their formation. You can travel up to the stunning Causeway for less than £10 on an hourly bus service from the city centre. Roam around the rocks and cliffs of one of the world’s most scenic views where you can see all along the Atlantic coast and across to Scotland. An award-winning visitor centre was built in 2013 which explains the geographic explanations behind the stones and will leave you with some thought-provoking ideas about giants and fairies.

There is much fascination with the ill-fated ship Titanic as it was built in the city’s Harland & Wolff shipyards. The most popular attraction in the city by far is the award-winning dedicated Titanic museum which opened a few years ago. Inside is a fantastic exhibition of interactive displays depicting Belfast’s industrial background as well as the history of the Titanic right up to where she lies today.  You can learn about fascinating facts about the liner, see recreations of on board cabins and explore the gift shop and champagne bar at the top of the famous grand staircase. There is a small admission fee but it’s definitely worth it as you could spend at least half a day here. 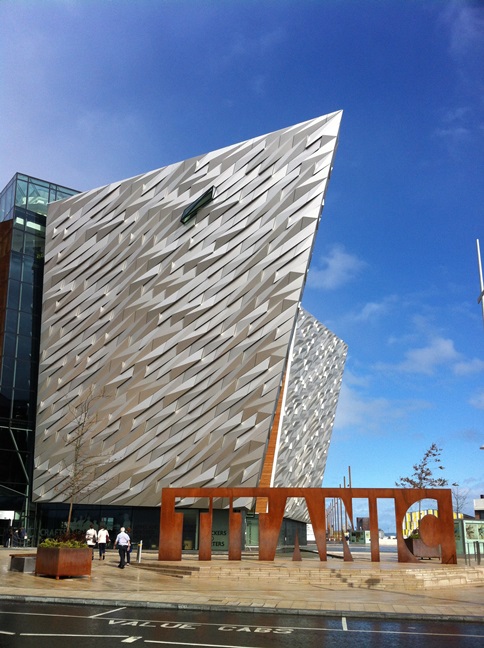 If it’s a rainy day, you can escape the weather by visiting the most popular indoor market in Northern Ireland, St George’s market. It’s right in the city centre and at the weekends it is really popular with locals and tourists exploring the local food and crafts stalls. You can buy some delicious jams, chutneys or Celtic inspired jewellery to take home as souvenirs at very good prices. The market building itself was built in 1896 – take some time out to enjoy it with a coffee and cake too.

It’s hard to ignore the obvious divisions that still exist in the city. The large security gates and peace walls still separate staunch Catholic and Protestant neighbours where you’ll see painted murals on the sides of buildings and houses. I don’t think there is another city in Europe where you can experience this, so I’d highly recommend that you book onto a walking or bus tour to learn about the artworks in the neighbourhoods. They don’t cost a lot and will take you around areas such as Falls Road, Shankill Road and get a good sense of what The Troubles were like.